My day at Kentwell Hall was very interesting. I met all different types of people such as the: Butts, the Woodmen (which the Tudor family couldn’t have lived without); the Herald, the Dairymaids and Needlewomen. The Stillroom’s potions and lotions smelt lovely, because they had used exquisite smelling flowers.
One of the first things we did was see the Herald. The Herald is very fond of music, and thinks there should be more of it at Kentwell. He taught us about the family shield, which is a very beautiful design. People in Tudor times cannot live without a woodman because they have to prepare wood for the fire (there was one in nearly every room!) and you also need wood for the oven.
…
An Alchemist showed us a chameleon and a hornet. A Tudor doctor used some snail slime to treat wounds! The weavers were making baskets out of strips of wood.
Throughout the day the Tudors spoke olde English to us, some of it sounded quite different—using words like “aye” for “yes”. My favourite part of the day was watching the ladies making different types of cheese out of goat’s milk. There was a big wooden barrel full of milk which they were turning. They used wooden paddles to squeeze the water out of the cheese and make it into a cube.
….
We went into the Great Hall where William Clopton had spent most of his time. Everyone was dressed in Tudor outfits. Through the day we also saw archers, a Tudor school and the blacksmith. At the end of the day, we were called over by the guards. They had a gun which they showed us how to fire it. When they fired the gun we were quite close, it was really loud!
I was amazed that the people who stay there live like Tudors for the whole time. I learnt a lot and had great fun on my trip.
….
Thank you to Mrs Barber and Mrs Howles for taking us. 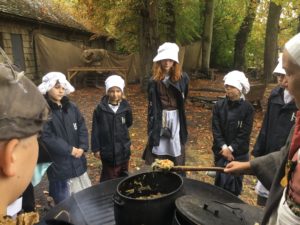 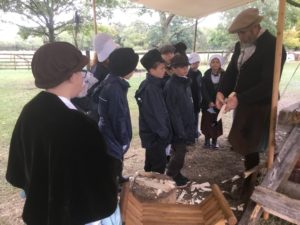