So have you started your Christmas shopping yet? When I espied our Christmas tree all beautifully lit up in the front playground this morning, I felt that little tingle of Christmas excitement. I know, by now, many of you will know exactly how many sleeps it is until Christmas morning, you may have wrapped every present and perhaps even adorned your house with tinsel and holly. However, this festive season can be overwhelming and, amongst all the excitement, we can forget the true message of Christmas.

One date that is frequently overlooked is the 26th December, or ‘Boxing Day’ as we refer to it in Britain. This national holiday has a long history and despite its peculiar name, it has nothing to do with fisticuffs, the trashing of empty boxes left over from Christmas or the return of unwanted presents to department stores!

There are two origins to this Christmas tradition. Firstly, it was a custom for tradesmen to collect “Christmas boxes” of money or presents on the first weekday after Christmas as thanks for good service throughout the year’  and since these good folk would have to wait on their masters on Christmas Day, the servants of the wealthy were allowed the next day to visit their families. The employers would give each servant a box to take home containing gifts, bonuses, and sometimes leftover food. The second origin of this holiday arose from the alms boxes that were placed in churches during the Advent season for the collection of monetary donations from parishioners. Clergy members distributed the contents of the boxes to the poor on ‘Boxing day’ in honour of St Stephen, the first Christian martyr, whose feast day falls on 26 December. Hence why Good King Wenceslas, who was actually a Duke of Bohemia in the 10th century, risked life and limb on a freezing winter night to feed a peasant who had chosen a most inclement evening to gather winter fuel. His fabled act of generosity took place on the Feast of Stephen, on which day it was a Christian’s duty to help those less fortunate than oneself. And so the practice developed of people giving Christmas boxes – commonly a small gift or some money – to those less fortunate or in need.

Each year at Heathcote we support the giving of such boxes through our shoebox appeal. The British Aid For Deprived Children or BADC, an Essex-based children’s charity, has made 118 humanitarian visits to Eastern Europe and India, since its founding in 1990. Their convoys have covered over 400,000 miles and delivered over 813 tonnes of equipment, clothing and medical aid and supplies.

George and Marion Mills lead the British Aid for Deprived Children charity, making 118 humanitarian visits to Eastern Europe and India since its founding in 1990. 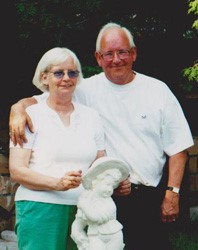 This amazing charity work is led by George and Marion Mills.  In 1992, BADC, in collaboration with British Humanitarian Aid, took a 105 vehicle convoy to Croatia which stretched for an astonishing 4.5 kilometres, and is in the Guinness Book of Records as the largest ever humanitarian convoy. George and Marion’s work all began with a small article in an Essex church magazine about the plight of Romanian orphans. When they read the article they were so moved by the horrific descriptions of the orphanages and sad children, they decided that they must do something themselves. They borrowed a huge 7 ton truck, filled it with as many supplies, toys and clothes that local people could donate – and drove the 1,249 arduous miles to an orphanage at Gaesti in Romania. As the years passed their trips became more regular, the trucks became larger, the supplies became more complex and their destinations more varied. They were even captured by Serbian soldiers during the Yugoslavian conflict when taking much needed aid to Croatian refugees. In January 1995, George and Marion were contacted by a Ukrainian woman living in the UK who told them the story of Chernigiv, situated just 68kms from Chernobyl and badly affected by the 1986 disaster. Within days they were on a plane for a meeting with the local doctors at their tiny rehabilitation centre. Shocked by this latest encounter, George and Marion returned to England and set about acquiring the items on the Chernigiv shopping list. Soon, while still finding time to deliver vital supplies to Romania and Croatia, they were on another difficult journey through Poland to the Ukraine with a fully-laden truck load of desperately needed supplies. This began a long relationship of trust and regular deliveries to Chernigiv which helped change, and in many cases save, the lives of countless young victims of the Chernobyl disaster – and the eventual building of The Revival Centre, a rehabilitation centre which offers highly medical and social support for disabled children and children affected by the Chernobyl disaster. Today George and Marion continue to carry out their wonderful work. Their last trip took place in October this year when they flew out to the Revival Centre once again in Chernigiv to visit the children.

We are extremely grateful for all the donations of shoe boxes received so far this week and would especially like to thank the Barthorps (ex-parents) who, as usual, have made an extremely generous contribution to this very worthy cause.

Step into my shoes….

We use cookies to ensure that we give you the best experience on our website. If you continue to use this site we will assume that you are happy with it.Ok